We Have Made Millions of Custom Challenge Coins for Customers... WORLDWIDE!

COINFORCE® is Owned & Operated by Retired Military Veterans! Thanks for your Support! Order Today, Get Them Next Week!

We Earn Our Stripes Every Day!® Trusted Since 2003. 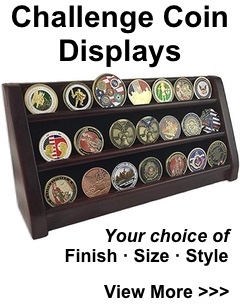 What are Challenge Coins? Challenge Coins are metal coins that come in various sizes, shapes, and styles that are typically awarded to an individual for excellence, special achievement, or any other reason deemed worthy by the presenter.

Challenge Coins are also used in various ways to boost morale, create camaraderie, motivate, inspire, special occasions, and remembrance, even as a business card that will never get tossed away.

During World War I, American volunteers from all parts of the country filled the newly formed flying squadrons. Some were wealthy scions attending colleges such as Yale and Harvard who quit in mid-term to join the war. In one squadron, a wealthy lieutenant ordered medallions struck in solid bronze and presented them to his unit. One young pilot placed the medallion in a small leather pouch that he wore about his neck…Read more about the history of Challenge Coins…