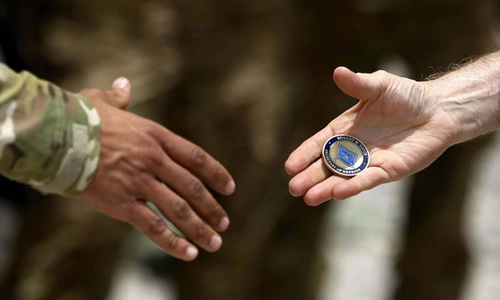 During World War I, American volunteers from all parts of the country filled the newly formed flying squadrons. Some were wealthy scions attending colleges such as Yale and Harvard who quit in mid-term to join the war. In one squadron, a wealthy lieutenant ordered medallions struck in solid bronze and presented them to his unit. One young pilot placed the medallion in a small leather pouch that he wore about his neck.

Shortly after acquiring the medallions, the pilots’ aircraft was severely damaged by ground fire. He was forced to land behind enemy lines and was immediately captured by a German patrol. In order to discourage his escape, the Germans took all of his personal identification except for the small leather pouch around his neck. In the meantime, he was taken to a small French town near the front. Taking advantage of a bombardment that night, he escaped. However, he was without personal identification.

He succeeded in avoiding German patrols by donning civilian attire and reached the front lines. With great difficulty, he crossed no-man’s land. Eventually, he stumbled onto a French outpost. Unfortunately, saboteurs had plagued the French in the sector. They sometimes masqueraded as civilians and wore civilian clothes. Not recognizing the young pilot’s American accent, the French thought him to be a saboteur and made ready to execute him. He had no identification to prove his allegiance, but he did have his leather pouch containing the medallion. He showed the medallion to his would-be executioners and one of his French captors recognized the squadron insignia on the medallion. They delayed his execution long enough for him to confirm his identity. Instead of shooting him they gave him a bottle of wine.

Another tradition dates to US Military personnel assigned to occupy post World War II Germany. With the exchange rate, the West German One Pfennig coin was worth only a fraction of a U.S. cent, and they were thus generally considered not having enough value to be worth keeping – unless one was broke. At any place where servicemen would gather for a beer, if a soldier called out “Pfennig Check” everyone had to empty their pockets to show if they were saving any West German Pfennigs. If a soldier could produce a Pfennig, – it meant that he was nearly broke, . and if a soldier could not produce a Pfennig, it meant that he had enough money to not bother saving them, – and thus enough money to buy the next round.

The tradition of the military challenge coin giving dates back to Vietnam actually when soldiers would tote along a piece of “lucky” ordnance that had helped them or narrowly missed them. At first it was small arms ammunition, but this practice grew too much bigger and more dangerous ordnance as time wound on.

It became then actually a dangerous practice because of the size and power of the ordnance being carried, so commanders banned it, and instead gave away metal coins emblazoned with the unit crest or something similar. The main purpose of the ordnance had been when going into a bar, you had to have your lucky piece or you had to buy drinks for all who did have it. The challenge coins worked far better in this regard as they were smaller and not as lethal! So, if you go to a military bar, whip out a military challenge coin and slam it down on the bar, those who lack one buy drinks! Obviously you have to be careful about this tradition… However, Commanders and units give out coins for this and as mementos for services rendered or special occasions.

This tradition continues to this very day and has also been embraced by law enforcement, firefighters, businesses, and many other organizations. The challenge coin tradition is sweeping across America and the rest of the World!

Since 2003, we’ve made MILLIONS of Custom Challenge Coins for clients worldwide, let us design and make yours too! Let’s get started…today! Get a FREE no-obligation quote >>

Can Civilians Have Challenge Coins?

Yes, civilians can have Challenge Coins. The tradition of Challenge

How Do You Hand Someone A Challenge Coin?

Handing someone a Challenge Coin is a special and meaningful

Challenge Coins For Anything

Challenge Coins can be used for a wide variety of

How Are Challenge Coins Used?

Challenge Coins are small, metal coins that are used to